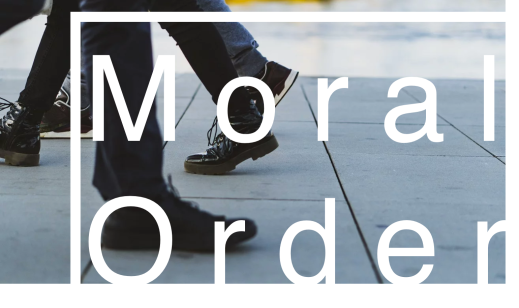 The world has a moral order. Many are unwilling to concede that truth, however. But the world functions as if that is the case. Let’s take my kid’s classroom as an example.

In my kid’s classroom there is a telos, or goal for which the students gather. There are also specific means that are employed to reach that end.

The whole education system is predicated upon the goals of teaching things that are deemed important for the betterment and healthy functioning of the individual student and society. Various means are employed to best meet those goals. There are subtle disagreements of course. For example, people have disagreements over the best forms of discipline. But there is overarching agreement across America.

Here are a few things I left out of the video…

Thinking and talking about abortion is very difficult but also important. I, therefore, ask that you consider what I say before discounting it. I have strived to consider the subject with compassion and candor. So, out front, I want to say two things: First, I believe abortion is clearly wrong and cannot be morally justified in any circumstance. Second, and very important, there is grace, forgiveness, and hope for those who have had an abortion.

We all do wrong. The Bible says everyone is a sinner. But it also thankfully says that whosoever—liar, thief, cheat—goes to Jesus in faith and repentance can receive new life and be saved by the grace of God. All our sins can be washed away. First John 1:9 gives us all hope: “If we confess our sins, He is faithful and just to forgive our sins and to cleanse us from all unrighteousness.” It is vital that we all remember that there is grace, forgiveness, and hope for all!

What should we think about marijuana use?

It’s reported that George Washington grew hemp and employed it (notice I didn’t say “smoked it”) along with other Founding Fathers, such as Thomas Jefferson.[1] And a few Presidents have admitted to smoking marijuana.[2] News sources say that support for legalization is at an all-time high (no pun intended).[3]

Marijuana, whatever we think about it, is all over the place. It’s legal in some places and in most places people are living like it’s legal. And very soon it may be legal all across the country (my issue here is not to discuss whether or not it should be legalized). The question for the Christian is more than a question of legalization and cultural acceptance. The issue has to do with whether or not we believe God would be pleased with our use of marijuana.

This question will need to take into account legalization and even cultural acceptance but is not ultimately based on either of those considerations. That’s why I said the way we come to the question is really important. What is guiding us as we look at the question of marijuana use? If it is just our feelings and the surrounding culture then that will lead to one set of conclusions. If it is the Word of God, however, it will likely lead to a different set of conclusions.

So, let’s look at what the Bible says.

Marijuana And The Bible

I have talked to a lot of people that boast about marijuana’s many benefits in recreational use. Some will even bring up Genesis 1:29 that says that God made every plant on the earth that produces seed and then says we “shall have them for food.” So, people ask, “Doesn’t that count for marijuana?! Didn’t God make it to be enjoyed? Shouldn’t we just receive it with thanksgiving (1 Tim. 4:3-5)?”

END_OF_DOCUMENT_TOKEN_TO_BE_REPLACED

The below is taken from Robertson McQuilkin’s book Biblical Ethics (512-14). I have found these general principles helpful:

We’re all limping and crawling towards the finish line

I’m learning as Christians that we’re all fellow sufferers. We’re all limping and crawling towards the finish line. We all have scars. They’re different but we all have them. I have them, you have them, and no matter what we do our kids will have them. We live in a broken world and we’re sadly […]

What is Expository Preaching?

What is expository preaching? What are the duties of the pastor and the role of the congregation?  Expositional preaching has three main characteristics. First, the passaged that is preached on is a single passage rather than various passages put together. Second, the main point or theme of the sermon is derived from the theme or main point […]